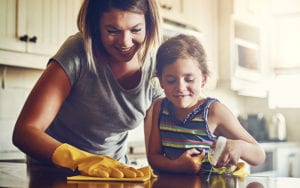 Poisoning is the leading cause of death in the United States, according to the National Center for Health Statistics.2 Nearly half of all deaths from drug poisoning are due to an overdose of prescription drugs, with opioid painkillers such as hydrocodone and oxycodone often being the culprit. Over-the-counter pain medications such as non-steroidal anti-inflammatory drugs (NSAIDs) can also be toxic. Ibuprofen, naproxen and aspirin are some of the most common NSAIDs.

Prevention: Keep all medicines out of the reach of children and others who may accidentally ingest them. Install high-quality baby guard locks on any cabinet that contains medication. Store medicine in the original container, always take medicine according to the instructions and never use other people’s prescription medicine. Download a medicine manager app like medicafe to remind you how much to take and when to take it.

Symptoms: Symptoms of overdose with prescription pain medication range from confusion, mood swings and nausea to breathing problems that can result in death.3 There are many symptoms of NSAID overdose, including abdominal pain, nausea, vomiting, dizziness, and blurred vision. Large amounts of NSAIDs can result in kidney damage, seizures or coma.4

Treatment: Call the poison control number above, or seek immediate help. If possible, inform medical staff about the victim’s age, weight and condition, as well as the name of the medicine, the time it was swallowed and the amount consumed.

It is not uncommon for cleaning products to contain a number of hazardous chemicals. For example, many toilet bowl cleaners and bath and tile cleaners contain hydrochloric acid, while sodium hydroxide (lye) can be found in drain cleaners and oven cleaners. Often these products are not handled and stored properly, leading to them being one of the main causes of accidental poisoning in children.1 Inhalation of certain cleaning agents can also result in poisoning.

Prevention: Always use household cleaners according to the instructions and put them away immediately after use. Store products where children or pets do not have access to them – e.g. On the top shelf of the pantry – and then install one KidCo door lock or similar device to help secure the pantry door. For added safety, switch to natural cleaning products that are toxic, such as Biokleen Spray and Wipe All-Purpose Cleaner.

Symptoms: Symptoms of intoxication vary depending on the type of detergent used. For example, swallowing toilet bowl cleaner can cause burns in the esophagus, severe pain in the abdomen and blood in the stool.5 Symptoms of poisoning from drain cleaners include burns in the mouth, difficulty breathing, salivation and collapse.6

Treatment: If the victim has swallowed one of these cleansers, they should drink water or milk immediately – unless they have difficulty swallowing. Then call the poison control number or seek medical attention immediately.

Topical anesthetics contain anesthetic ingredients to reduce discomfort from things like sunburn, sore muscles and insect bites. When used according to the packaging instructions, topical anesthetics are usually safe. However, using more than the recommended amount or ingesting even a small amount of local anesthetic can lead to poisoning.

Prevention: Treat topical anesthetics like prescription drugs or other over-the-counter medications. Keep your first aid kits in a safe place, follow the label instructions carefully and put them back immediately after use. Also, never apply teeth gel to children under two years of age. Instead, massage their gums or use toothpicks to relieve pain.

Symptoms: Symptoms of intoxication may include strained breathing, slow heartbeat, drowsiness and seizures. Benzocaine is an ingredient often found in tooth gels that can cause methemoglobinemia, a serious condition in which the amount of oxygen in the blood becomes dangerously low.7 Symptoms of methemoglobinemia include headache, rapid pulse, and bluish color of skin or nails.

The purpose of insecticides is to kill insects such as ants, cockroaches and wasps – but the chemicals used to rid your home of these pests can also be dangerous to your family. Organophosphates and carbamates are two common types of insecticides associated with severe poisoning. Insecticidal poisoning can occur by swallowing, inhaling or absorbing through the skin.

Related post  The Most Commonly Googled Baby Topic in Your State

Prevention: Store insecticides in their original containers, closed and out of the reach of children and pets. Use as little insecticide as possible and avoid using them in confined spaces. Switch to insecticides that use pyrethrin as they are made from flowers and are not as toxic to humans and pets.

Symptoms: Organophosphate and carbamate poisoning can cause a variety of symptoms, including blurred vision, salivation and vomiting, and seizures.8 In addition, these products can overstimulate organs and result in them shutting down.

Treatment: In case of ingestion, the victim must not vomit. Seek medical attention immediately. Doctors may use the drug atropine to treat severe insecticide poisoning. If the insecticide came in contact with the victim’s clothing or skin, they should remove their clothing and wash their body immediately.

Extinguishing liquid or granulated dishwasher or detergent can be dangerous, but washing belts pose a greater risk of severe poisoning. Over a two-year period, U.S. Poison Control Centers received more than 62,000 calls related to exposure to laundry and dishwashing liquid that affect children under the age of six — with approximately 60% of those calls triggered by detergent exposure.9

Prevention: Young children and pets can easily be mistaken for colorful and pleasantly scented detergent pillows with sweets. Then store the pods in their original container with the lid closed, and store them in a safe place. Even better, avoid pods altogether and use a liquid or granulated product.

Symptoms: Sink or granulated dishwasher or detergent can cause vomiting and diarrhea. Ingestion of a detergent pillow can result in symptoms ranging from vomiting and drowsiness to aspiration and difficulty breathing.

Treatment: Call the Poison Control hotline or seek other medical attention immediately. Do not allow the victim to vomit unless instructed to do so by a doctor.

Who is at risk of accidental poisoning?

Everyone is at risk of poisoning by accident, but some age groups experience greater poisoning events than others. Children younger than six years account for 44% of all poison exposures, with boys being poisoned more often than girls.1

Adults account for 38% of accidental poisonings and 7% of victims are teenagers. Among teens and adults, women are victims more often than men. Peak poisoning rate occurs in children under two years of age, but poisoning in adults and teens tends to be more severe.

Keep these and all other potentially toxic household products safe to help protect your home from poison. SafeWise also recommends installing carbon monoxide detectors as part of your overall home security plan to prevent poisoning.

If you do research before setting up a high-quality home security system. Lorex and Night Owl security cameras are products that you have probably heard of before. Both offer several important benefits and can contribute significantly to the security of your...

END_OF_DOCUMENT_TOKEN_TO_BE_REPLACED

Depending on the equipment you have, Samsung SmartThings supports smart home devices from over 100 brands. Listing them all here would be a struggle for everyone, so here are some highlights from the complete Works with SmartThings list: Unfortunately, you will...

END_OF_DOCUMENT_TOKEN_TO_BE_REPLACED

Despite all the safety precautions you may take, unfortunate incidents still happen. So it is a good idea to cover your bets with tenant insurance. Unlike your landlord's insurance, which only covers the building you live in, your tenant's insurance covers...

END_OF_DOCUMENT_TOKEN_TO_BE_REPLACED

Our locations are based on university cities that report the lowest violent crimes and property crimes per capita. 1,000 inhabitants. We use the latest FBI statistics, which currently includes crime and population data reported for 2019.3 This data does not...

END_OF_DOCUMENT_TOKEN_TO_BE_REPLACED

Hulu is an on-demand streaming platform that has been available for over a decade. Along with other giants like Amazon and Netflix, it is one of the leading and largest streaming platforms in the United States and currently hosts more than 40 million...

END_OF_DOCUMENT_TOKEN_TO_BE_REPLACED

Is Your System Updated With the Latest in Home

END_OF_DOCUMENT_TOKEN_TO_BE_REPLACED

What Is Home Automation and How Does it Work?

END_OF_DOCUMENT_TOKEN_TO_BE_REPLACED

Expand Subscribe to our Youtube channel for more videos like this! Learn how to protect your home, your loved ones, yourself and your belongings. The National Fire Prevention Association reports that defective wiring is the leading cause of house fires. To...

END_OF_DOCUMENT_TOKEN_TO_BE_REPLACED

A home guarantee can be a great way to help cover unexpected costs and protect your new investment as a homeowner. But it is important to understand the function of a home warranty and what it typically covers. Make sure you have the best protection for your...