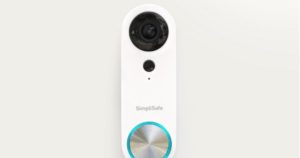 All SimpliSafe cameras offer HD video and night vision. They also offer several ways to store your videos, which is great if you want to keep your videos a little longer.

Because SimpliSafe cameras have fairly basic features and limited smart home integration, they work best when added to an existing SimpliSafe system.

All SimpliSafe cameras have these features:

In the SimpliSafe app, you can see what triggered the camera, saved videos and even talk to the person on the other side of your camera with the two-way voice feature.

SimpliSafe cameras do not record 24/7. Video recordings are limited to short clips recorded when motion is detected. We like this because it means you do not have to wade through hours of footage to find an event.

If you want your camera to make friends with other smart devices in your home, SimpliSafe cameras work with Google Assistant, Amazon Alexa and IFTTT. You can use voice commands to connect your SimpliSafe home security system and check the status of the system.

These security cameras are a great addition if you already have a SimpliSafe home security system. When the alarm on your system is triggered, the SimpliSafe representatives in the monitoring center can use your camera to check if the security system was triggered by an actual threat or by accident.

SimpliSafe cameras do not have local storage space, unlike competitors like Eufy Video Doorbell or the Wyze Pan Cam. To save a video, skip to a cloud storage subscription.

Storage is pretty cheap so it does not stretch your budget. Rates start at $ 4.99 per person. Month for a camera. If you plan to add more cameras, the unlimited camera package is only $ 9.99 per. Month. Whichever package you choose, videos are stored for 30 days in the cloud.

If you have a SimpliSafe home security system, we recommend Interactive

Surveillance package for $ 24.99 per. Month. You get professional monitoring and unlimited storage of recordings for up to 30 days.

You do not need storage for your home camera, but it’s convenient. Say, for example, that you are using SimpliSafe Video Doorbell Pro and it catches someone stealing a package out of your porch. Saving this video will be crucial to help police track down the thief.

While many home security cameras are battery-powered or solar-powered, SimpliSafe cameras are wired. SimpliCam has a power cable while the video doorbell is connected to your home electrical system.

Wired cameras have their pros and cons. You never need to change or charge the camera’s batteries. But adding another cord to expensive businesses is not ideal.

And if you do not already have a cord cord, bring an electrician to connect the doorbell camera. That kind of nixer all the DIY ease that SimpliSafe Video Doorbell Pro offers.

Now that you know a little about SimpliSafe cameras in general, let’s dive into the details of each camera to see how they can fit into your home.

Related post  How do we choose the safest cities? Our location has been demystified

Accidental deaths have been rising in recent years, according to data from the Centers for Disease Control and Prevention. Unfortunately, many of these unintended deaths occur in the home - especially for children and the elderly. Leading causes of these deaths...

END_OF_DOCUMENT_TOKEN_TO_BE_REPLACED

The 9 Most Dangerous Electrical Hazards In The

Most of us could not live without electricity, and neither would we really. Electricity is what keeps the light on and the food in the fridge cold. But living in a house that is powered by electricity also means that there are electrical hazards around you. As...

END_OF_DOCUMENT_TOKEN_TO_BE_REPLACED

How to Change a Flat Tire: A Step-by-Step Guide

How to change a car tire step by step If you are driving when you get a flat tire, slowly lower the car's speed, turn on the car's hazard lights and look for a safe place to stop. If possible, pull into an open parking lot or find another low-traffic area. If...

END_OF_DOCUMENT_TOKEN_TO_BE_REPLACED

Give your car one more time Is your car roadworthy? Make sure it is with a quick maintenance appointment at your local garage or by doing it yourself. You should check your tire pressure, tread levels, oil levels, wiper blades and fluid levels. If it's time for...

END_OF_DOCUMENT_TOKEN_TO_BE_REPLACED

5 Ways To Deal with Nosy Neighbors

A good neighbor can enhance your experience of living in a community and can be a resource you trust to protect your home. Not only can they become friends, but a good neighbor can also help provide extra security by seeing your house when you walk out of town....

END_OF_DOCUMENT_TOKEN_TO_BE_REPLACED

The front door is your first line of defense against a potential burglary. Statistics have shown that up to 34% of burglaries occur through the front door. For this reason, it's always a bright idea to take a look at your current front door security for ways...

END_OF_DOCUMENT_TOKEN_TO_BE_REPLACED

The Most Commonly Googled Baby Topic in Your State

Answer the 10 most common baby questions 1. What is the infant's Motrin or Tylenol dose? This is one of the most searched questions because specific information is so hard to find. Unfortunately, we will not be able to resolve this for you. Because each case is...

END_OF_DOCUMENT_TOKEN_TO_BE_REPLACED

Info current from 09/24/2021. Offers and availability may vary by location and may change. Dashlane Free has a lot of features to protect your passwords and more: Unlimited password storage Password Generator Password Changer ™ Password monitoring Safety...

END_OF_DOCUMENT_TOKEN_TO_BE_REPLACED

Autumn is a good time to re-evaluate your home security. While most homeowners associate the balmy summer with burglary and burglary, fall is also an ideal time for burglars and thieves to strike. Since many homes are vacant and homeowners are on vacation...